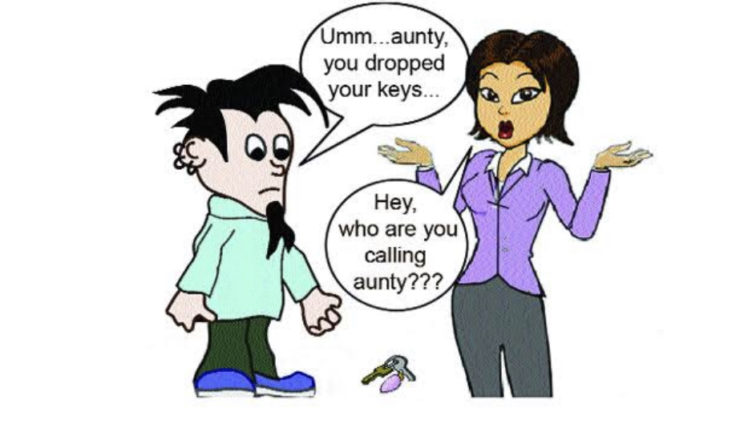 Yes! I draw the title of this article from the famous lines of dear Shah Rukh Khan, “MY NAME IS KHAN, AND I AM NOT A TERRORIST”. Auntie, the most ‘hostile’ way of addressing a lady of my age or even little younger in her 30’s, is actually a spoiled form of Aunt, which according to any English dictionary means father’s/mother’s sister. But in our society, it has a filthy meaning of not being young anymore. Well it’s a common parlance in India, to refer to an even ‘not-so-elderly’ lady an “Auntie”, if either she is married or God forbid if she has a baby.

The first time I horribly encountered this ‘not-so-good’ sounding reference was from a vegetable vendor (who must have been almost of my age). Trust me, it took me quiet a while to come back to my normal state, before the word kept on echoing in my inner-self. Willing-Unwillingly, I kept on saying (although only to myself), the famous line from the TV serial Hum Paanch, “Auntie Mat Kaho Na”. Rest few hours after coming back home, I then spent on checking for any wrinkles on my face; salt and pepper hair; or any such trait in my physical appearance which pushed me into this new ugly stamping. I still try to convince myself, maybe it was because I was carrying my young boy in my arms, that I was considered a senior citizen. You see, for no other reason that traumatic sobriquet could have come ☹.

Another very interesting incident I remember is of one of my friends. She and her brother once went for some legal paper work to the Municipal Corporation Office, where her brother committed the crime of the highest degree of asking the lady typist, “Auntie, how much would you charge for typing the rent agreement contract”. For obvious reasons, she got so offended by the way she was addressed that she refused to type it altogether. Then my friend understanding the intensity of the offence, calmed her down by calling her ‘Didi’, to which atleast she paid some heed 😊.

Hmmm! So what is that which makes us so insecure at the very thought of this cursed reference. Is it the fear of being out of the 20s league, or the strong feeling that “Say What May, I am ‘NOT OLD!’. I think it is the latter which dominates in my case. And why not? While doing rigorous exercises in Aerobics I am able to do the same number of crunches, sit-ups, planks, bungies as any other teen. I also readily accept the challenge of a race in the swimming pool with my elder son, who’s at the peak of energy as he is just 13 (#that’s a different matter, that I have never won :{ ), would you still call me an ‘Auntie’?

As a matter of fact, I think it the cultural and customary continuation of the olden times, which we have to accept with a pinch of salt. When our mothers were in our age, they were sort of not doing what we do today. Most of them were not working, not driving, not working out in the gyms (# that’s a different matter that they had an all-day work out with jhaadu and pocha or in the kitchen), or swimming (# and that also in a swimming costume…Out of Question). For these days women are much smartly and ‘westerly’ dressed and many a times it is difficult to make out that it’s a mother and a daughter duo. So, if the times are changing, why do we carry that age-old books of accounts. Let’s come out of this dogma of calling every other lady and gentleman as Auntie and Uncle. Atleast I have made this effort, to address anyone who dosen’t have a formal defined relation with me or the ones I am not acquainted to as Ma’am and Sir.