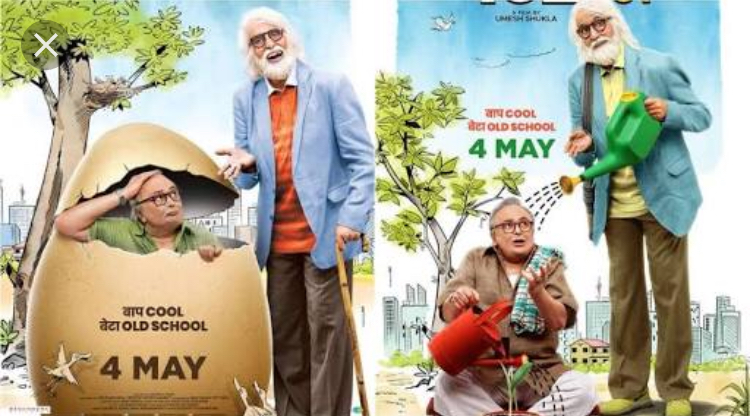 Rishi Kapoor and Amitabh Prove That
Age Is Just A Number!!!

How often do you see two supreme actors come together on screen and outplay each other?

It’s a treat, in fact it’s a gala dinner to watch the magnificence of Amitabh and the brilliance coupled with cuteness of Rishi Kapoor on screen.

But this round is actually won by Rishi Kapoor, he steals the show. Along with both the veterans, is Jimit Trivedi, whose perplex reactions and complex emotions make you laugh in every scene he is present. He is definitely an asset in his Junagarhi gujrati accent and comes up with pitch perfect timing.

Director Umesh Shukla, of Oh My God fame, again adapts a Gujarati Play and the movie revolves around only 3 characters, so much so that you won’t be able to find a fourth character in the movie

The movie carries a beautiful message and first time in my life I saw almost 50% theatre occupied by Senior Citizens, it was so good to see them enjoy, laugh, clap and cry with the two veterans.

The movie essentially teaches you to live life king size and that we shouldn’t worry about the old age, we should always think and behave in a positive manner. Of course it’s not true for everyone, but the movie targets most of the retired class people and urges them to not get bogged down and go into a shell, but explore even more. You have all the time now, so what if you are old, it’s all in your brain, keep the spirits alive.

The first half is hilarious to the core and Rishi Kapoor, as Babu, is just too cute. He is fabulous and delivers a mind-blowing performance as the 75 yr old son of Amitabh Bachchan, as Dattatreya or Dattu. The scene where Rishi Kapoor is made to write a letter to his dead wife, you will literally fall off your seats laughing.

The movie touches various aspects of old life and brilliantly covers them without much emotional rona dhona. You eventually do feel choked, and the credit goes to Rishi Kapoor, he lets the emotions in him seen with such expressions, I was left speechless.

I was so able to relate one of the scenes in the movie with my life as My school was next to Juhu Garden in Mumbai and I used to travel there very often with my Parents. His expressions when he stands in front of the artificial cemented plane were the same expressions with which I saw that plane this January when I took my son there. It gave me goose bumps.

Similarly, every person be it middle aged or Old will be able to relate to this movie at some point or the other.

While the first half is out and out hilarious, the second half is emotional with lots of messages. It touches Alzheimer’s in detail, son befriending the parents, father and son love for each other, all bundled into those 50 minutes. The scene where Amitabh makes Rishi Kapoor sleep on a couch and dances on the old songs is so so touching. A father and son love even at the age of 102 and 75 is so aptly shown, it is a joy to watch it.

The length of the movie is perfect, 1 hr and 40 mins without any song at all.

Please take your parents and grand parents for the movie, they will enjoy every bit of it and trust me you will too along with them. This movie shouldn’t be missed and should be watched in theatre.