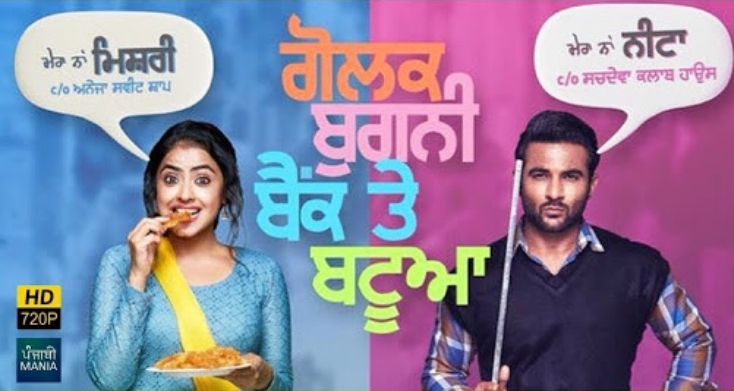 Director Kshitij Chaudhary creates a laugh riot with some impeccable and mature performances by the kings of Punjabi comedy B N Sharma and Jaswinder Bhalla. They take you on a trip full of fresh and clean humor. The first half is so engaging that you will literally fall off your seats.

When it comes to Punjabi Comedy Movies, I rate Carry On Jatta as the highest and it is my benchmark for rating any other comedy movie. Golak Bugni Bank Te Batua reaches pretty close to it, except that in the latter part of the second half, the movie takes a little serious turn, which the story demands and you don’t mind as an audience.

The movie is based on two demonetisations, one in 1978 and the second in 2016, it inter relates the pain and agony that people had to go through immediately after Demonetization in a funny and hilarious take on it.

The screenplay between the two stories is good and we have solid performances by Amrinder Gill as Bhola and Aditi Sharma as Shindi in 1978 along with Harish Verma as Neeta and Simi Chahal as Mishri in 2016.

The movie clearly belongs to two individuals who give mind blowing performances, as always, B N Sharma and Jaswinder Bhalla. The taunting between the two and supported effortlessly by Mishri and Neeta along with other supporting cast sends down a wave of laughter throughout the theatre.

The movie is a perfect mix of comedy intertwined with some very subtle work of emotions in the second story. Amrinder Gill as Bhola shines in his emotional one liners which give you goose bumps, in one such dialogue he says “Main meri maa nu yaad karke hun swargaa vich vi hichkiyaan nahin diwaniii” the emotions of Bhola at that time say it all. Aditi Sharma has very little to do except give support to Amrinder, which she does very well, she looks beautiful in the 70’s get up, goes to show that beauty isn’t dependant on your clothes.

Simi plays a more dominated role as the tinsel town sensation Mishri, who is a wannabe for all the bachelors in the mohalla. Harish Verma as love interest of Mishri supports with great comic timing.

Special mention of friends or the mohalla guys who are behind mishri, they give an amazing performance with great comic timing, Sumit Gulati as Gollu and Anita Devgan as his mother just add to the hilariousness adding to the laughter quotient of the entire movie. Likewise Pukhraj Bhalla as Kaala Mobilewala and Gurshabad as Dodhi do more than justice to their limited role.

This is one movie, which has contributions from each and every actor and that team work has taken this movie to a different level altogether.

All in all it’s a movie that you would enjoy in theatres, surprisingly in the second week, my theatre in Noida was packed, so yes good movies are recognised and people do go to watch them.

Watch it before it gets off from theatres.