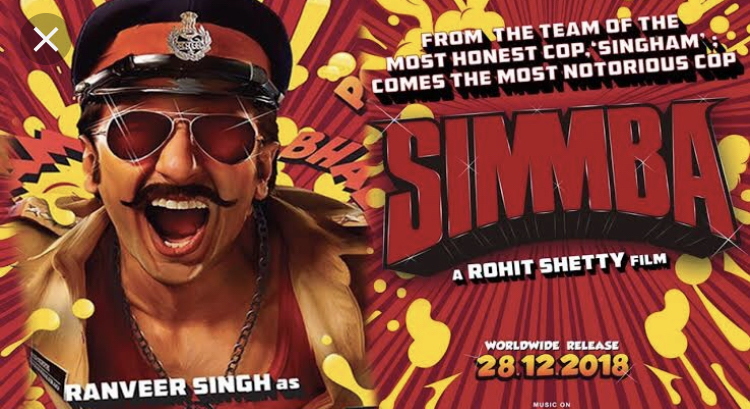 Simmba: Singham3 In All Aspects, Full on Masala

If you haven’t liked the Singham franchise, then you shouldn’t be reading this review as you aren’t gonna make any sense of what I am about to write, but if you do, you should first get your tickets booked for this third Singham Franchise with a different name SIMMBA.

If at all there would be a list compiled for Masala Movie Makers, Rohit Shetty would be featuring on top of the charts right up there. He comes up with a block buster movie which has all the right ingredients to make it rock at the Box Office and storm into the New Year with a bang.

It has good clean comedy, great action, a Super Hit Mika remix song along with the finesse of Ranveer and his dialogues. Each and every dialogue uttered by Ranveer Lands perfectly, I must say, A Star is REBORN.

Ranveer Singh captures the screen with maturity and ease, he combines his comic timing with his cruelness in the first half with a wonderful Marathi dialect. He livens up the screen whenever he appears and in fact there are very few moments he is not there on, nearly 80% of the screen presence is dedicated to Ranveer.

The theatre hoots and whistles on his entry, on his dialogues and jokes, and this is what I saw in Delhi, in Mumbai where people understand Marathi, there would be even more hooting. The song Aankh Maare by Mika is a classy number with the entire Golmaal star cast featuring in it towards the end, you enjoy each and every beat of the song, very well executed and a total Paisa Vasool remix by Mika. Theatre whistles when Arshad Varsi features in the remix song as well, I saw this scene in the theatre after a long time where there is huge amounts of hooting and whistles all along.

Well there is another moment in the second half when the theatre erupts, and when I say erupts I actually mean it, you just can’t hear the loud music in the movie, it’s that kind of noise that people make, that’s when Bajirao Singham enters in his signature style, I am not giving out a spoiler, it is there in the trailer as well, but boy when he enters in the movie, I haven’t seen such a reception for any actor in ANY movie in my lifetime. My son was so excited that he got up from his seat and with his hands up in the air he started to jump. WOW, Rohit Shetty does get the adrenaline in the people pumped for sure.

I haven’t spoken about Sara Ali Khan, well she is just there to shake a leg and is purely wasted like any other actress is in a Singham Franchise.

Ashutosh Rana as the honest cop shares a beautiful camaraderie with Ranveer and its those delicate moments which are handled beautifully by Ranveer and Ashutosh, a wonderful take on “Tu Hi Re” song by Ranveer is hilarious.

As far as the story is concerned, does it really matter? It is the same predictable movie with a wonderful first half, and a super predictable second half with the same old ghisa pita plot, but trust me, you don’t get bored and you enjoy to the core.

An out and out Masala Movie which will be a Block Buster getting into 2019.

My suggestion is, go out and enjoy your holidays, watch the movie and soak into the wonderful atmosphere you will find in the theatres. Do whistle if you can, as you will definitely feel like doing it, go ahead, do it, don’t hold back.